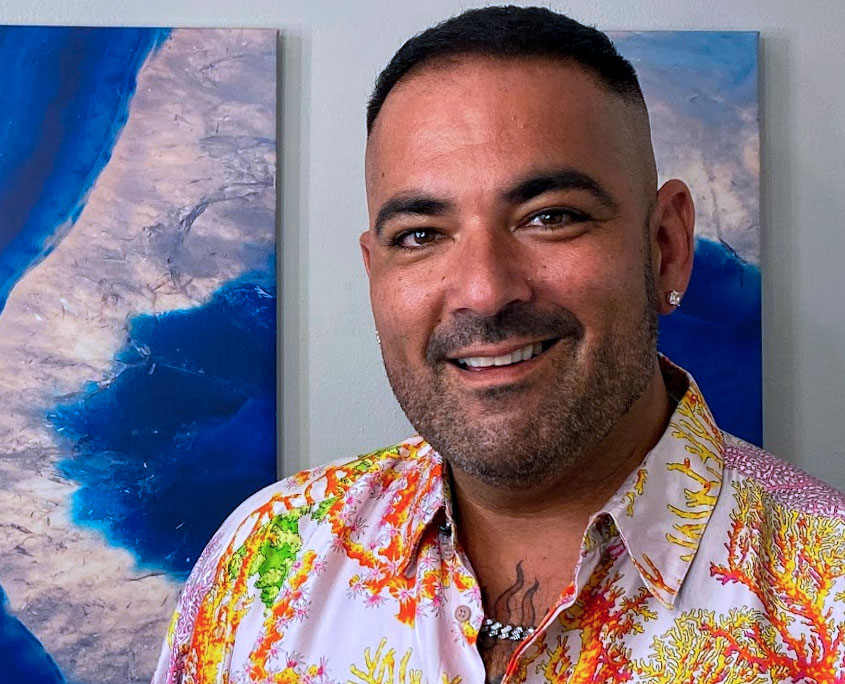 At age 40 Lawrence (Larry) appeared to have the perfect life. He enjoyed a satisfying career with a major hospitality company, working his way up the corporate ladder. He had a beautiful wife and two kids, to whom he provided a good life. But he couldn’t hold back what was happening inside himself.

“I was out shoveling snow, and I just collapsed,” Larry remembers. “I was crying uncontrollably. Over the next several days, I told my wife I think I might be gay. She wouldn’t believe it.”

In the coming months, Larry met and fell in love with a man, and after, left his marriage and started a new life with not much more than the clothes on his back. “I was never happier—I think I was the happiest when I had nothing!” With his new-found freedom, Larry began drinking more than he usually would. This was just the prelude of Larry’s recovery journey.

Born on Long Island, New York, Larry grew up in Suffolk County, Long Island. His father served in the Coast Guard and left his mother when Larry was only three years old. This forced his mother to take a part-time job at a laundromat to support her son. To make ends meet further, they moved in with his mother’s parents in a rural part of Long Island.  Larry’s grandfather taught him how to hunt squirrel and tend a garden. “We were poor. Kids teased me at school because I had to wait in the free lunch line.” Both Larry and his mother bonded over the resentment he felt toward his absent father. “He was out traveling the world, eating lobster, while we’re barely getting by on squirrel meat.”

Larry remembers questioning his sexuality at a young age. “I wasn’t sure if I liked guys or girls.” Although he endured his peers’ bullying, he locked these thoughts away as he cultivated an ambition and determination not to be poor for the rest of his life.

After high school, he got a job as a bellman at a major hospitality company, and eventually transferred to a location in Manhattan.  “I loved it! I didn’t want to go to college. I felt like I was learning all I needed to on the job. Plus, Manhattan opened a new, exciting world for Larry. “It was truly phenomenal—the mix of different cultures and diversity. I even had friends from Africa bringing fish heads for breakfast! It was an adventure, and in retrospect, I wanted to fit in badly with everybody.”

Living in Manhattan at 19 years old, Larry briefly experimented with men sexually. “I dabbled a little with guys, but it just didn’t feel right. It was easier to be with a woman at the time. In the early 1990s, there weren’t that many visible gay role models I could identify with. Anyone who was out was either totally queenie or in the news because they were dying of AIDS.”

Larry met his wife while working at the hotel. “It was total fireworks between us. I fell in love. I thought, ‘Ok, that’s it, I’m not gay!’ and we got married!” Looking back, Larry says he may have been pansexual. “This is a term I learned while I was in recovery at Inspire.”

Shortly after they married, Larry’s mother discovered she had a very rare form of cancer. “Serendipitously, my wife and I bought a house across the street from my mom, which enabled us to care for her.” Larry and his wife started a family quickly because they wanted his mother to have grandchildren before she passed. “She lived another 10 years and during that time we lived our best lives thinking she could leave us at any moment.” When her death did come, Larry was right there with her during her final moments. Playing family figurehead, Larry exhibited strength rallying his family around his mom for support during her final hours, but he never talked about how traumatic the experience was until he got to treatment at Inspire. “Seeing my mom die was tough. She bled to death with me at her side.”

Holding the pain of his mother’s death inside himself, Larry’s need for achievement went into overdrive. “I had to get out of the house we lived in. Everything had to be better and better, and my wife and I built an extravagant life which included a lot of luxuries and another baby.” It was this unsatisfying and uncompromising strive for perfection that brought him to come out to his wife.

He started a relationship with a man, and they moved in together. “I played the ‘perfect gay couple.’ But when that romance floundered, it put me in a major downward spiral. I began drinking 1.7-liter bottles of the cheapest Vodka I could find.”

Larry’s life crumbled around him as he tried his best to hold it together. He drank so much that he couldn’t sleep because whenever he stopped, painful withdrawal kept him awake. “So, my doctor prescribed Xanax to help me sleep, and Adderall to stay awake and focused during the day. Obviously, these drugs didn’t mix well with the alcohol. I was on the verge of a nervous breakdown. I felt like I was always taking care of everyone and not taking care of myself.” In addition to being in and out of therapy since leaving his wife, he became physically dependent on drugs and alcohol.

Larry aimed his pain and frustration at his father. “I wrote him a letter and I called him to yell, telling him it was his fault, that ‘I can’t take care of everybody anymore!’” Larry’s dad stepped right up to the plate and helped Larry’s ex-wife get him into detox. “I was on the verge of death, they found me overdosed outside my home. New York hospitals only keep you for a week. It wasn’t enough time. I went right back to drinking after they released me. I kept bottles stashed all over the place, and even out by the dumpster of my condo development. My family was on high alert watching me and my youngest son caught me drinking. My ex-wife, friends, current and ex-boyfriends told me I needed to go to treatment. Again, I went to a place in New York, but it still wasn’t a good fit.

“I was really scared and still struggling with my sexuality,” says Larry. “I needed a treatment center with trauma-informed care for LGBTQ individuals.”

Literally through six degrees of separation, a close friend of Larry’s family knew Donna Weinberger, CEO of Inspire Recovery and recommended Larry check them out. “When I visited Inspire online, I saw the colorful website and that they offered a holistic approach to treatment with services like meditation and tai chi—it seemed the very opposite of me. I’m like a ‘stainless steel, all-black and white’ kind of guy, but I felt like I needed a more holistic environment to come to terms with my alcoholism and sexuality.”

At first, Larry’s insurance wouldn’t cover Inspire, but with his dad’s help, he eventually persuaded them that it was medically necessary because he was gay and struggling with his sexuality. Once the insurance came through, he got the good news call from Inspire Recovery’s National Outreach Director Joyce Matera. “At first my kids asked, ‘why do you need a gay rehab?’, but I told them ‘Trust me—I’ll come back a better dad – I need this.’” 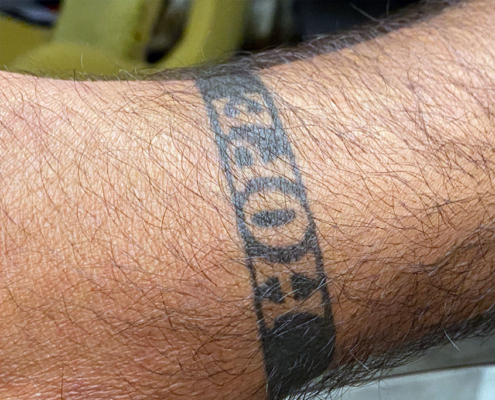 Like most addicts, Larry had one last hurrah with alcohol, getting drunk at a bar after his plane landed at Palm Beach International Airport. Inspire sent him to Florida Center for Recovery to detox. “They gave me a white bracelet that said ‘hope.’ This saved my life. I looked at it on my wrist day after day as the clock seemed to click so slowly. I was actually starting to feel some hope.” To remind himself of this turning pointing in his recovery, Larry now has the same bracelet with the word “hope” tattooed on his wrist as a constant reminder of his journey.

Larry admits that there was still a transition period when he arrived at Inspire. “It was humbling—I relinquished control of my life. This was a big deal for me! I was always in control of everything,” he says. “I thought the other clients were nuts. But after a while, listening to the problems and issues they dealt with—I gained a lot of perspective.”

In therapy, Larry started recognizing his overachieving, “black and white” personality and how it affected his life.  “Everything was in excess—losing weight, gaining weight, eating, drinking, working, exercise, making money. I do everything to the max!”

Inspire’s Program Director Jaki Neering was Larry’s primary therapist. “I didn’t like her style at first. She didn’t talk. She was so quiet it drove me crazy. But I began talking and understanding the process.”

Through his time at Inspire, Larry cultivated patience. “I couldn’t always talk to Jaki when I wanted to—she had other clients to see. I realized when I relinquished control and let people do what they needed to do, this started my healing.” Larry began recognizing the importance of living in the moment. “Just being alone with my own thoughts was ultimately life changing.”

Larry also became more open to asking for and accepting help from others. “It may sound silly, but the first morning I woke up at Inspire, I realized I forgot to buy coffee. Another client noticed my distress, and offered me some of hers,” he says.  “This small act was eye-opening for me. Feeling other people take care of me was very releasing.”

While at Inspire, Larry also met and fell in love with David, another client. And despite the usual warnings against rehab romance, the two have stuck together and made it work. “We’re successful because each of us is responsible for our own recovery. I do mine and he does his.”

Larry and David eventually settled in a condo in South Florida in the town in which they met. Larry is back to his career in the hospitality industry following unemployment from the COVID-19 pandemic. “I’m happier with a simpler life–I don’t miss any of the old me,” he admits. “I’m no longer striving for perfection I’ll never attain. I let go and things are great.”

Larry is proud to be sober from drugs and alcohol for three-and-a-half years. “I’m not ashamed of my experience. I easily opt out of drinking. Working in hospitality where cocktails are the norm, I started with ‘I don’t drink for health reasons.’ But now I proudly tell the truth—I’m an alcoholic.”

Just like an ex-smoker that hates cigarette smoke, I hate alcohol. I’m anti-boozer! I love the way I feel and love the way I look. This might sound vain, but I look better than ever. 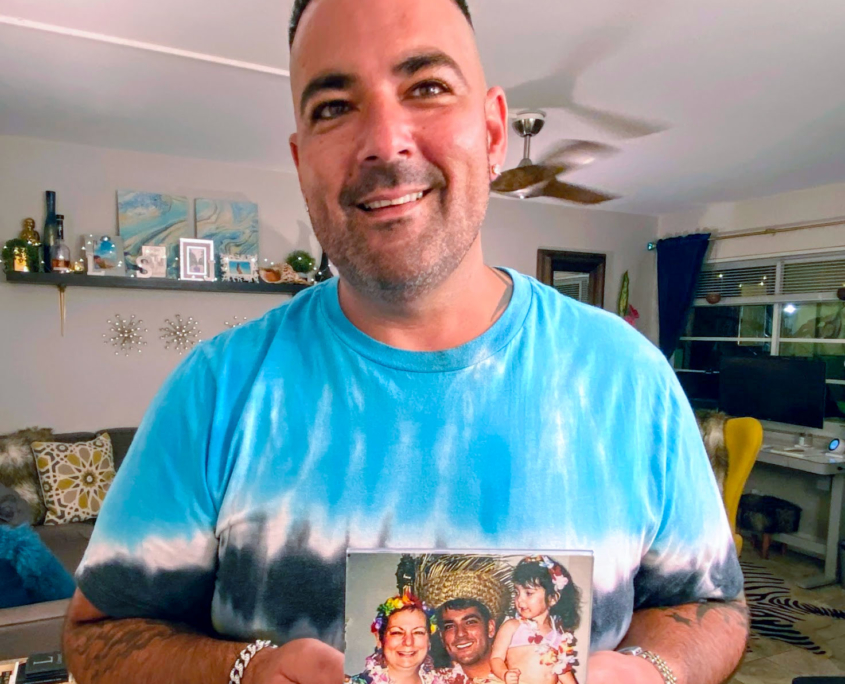