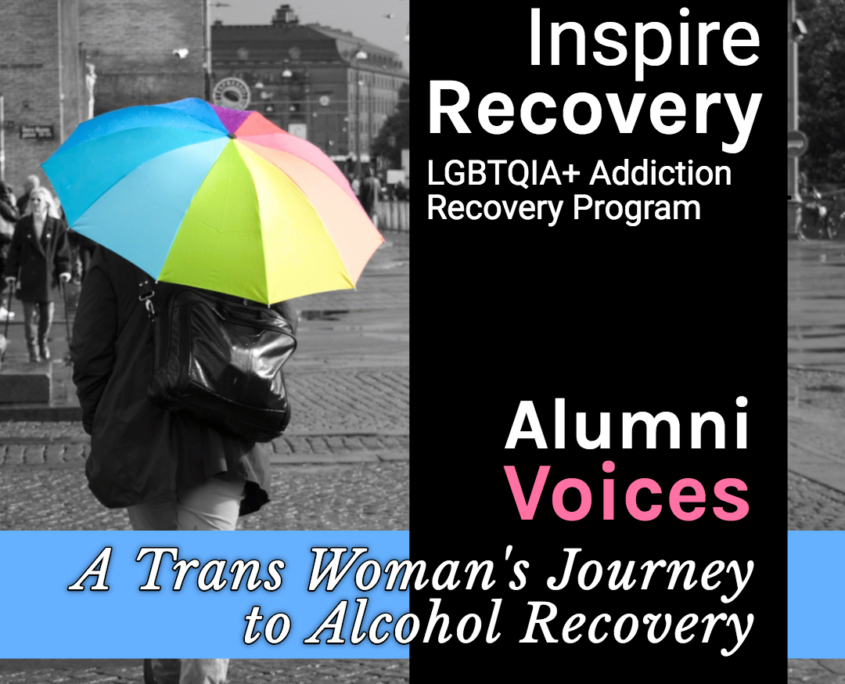 Are you or is someone you know a trans woman struggling with alcohol addiction?

A Trans Woman’s Journey to Alcohol Recovery is a personal account written by an Inspire Alumni. Author JN has written several articles for our Alumni Voices page. Through her battle with drugs and alcohol, she continues to live clean and sober today. Trigger Warning: substance use, sex work and attempted suicide referenced.

If you are LGBTQIA+ and struggling with an addiction to drugs and alcohol, call Inspire Recovery today 561-899-6088 to find out about getting help.

Accepting the Lows of Alcoholism

The fact is, drinking never made anything better for me. This was a fact that was hard for me to accept for a very long time.

As a bisexual, intersex trans woman, I took a liking to the gay bars and other typical queer community hangouts. Which typically involved me getting hammered.

Sure, when I first entered recovery I knew that my drug addiction to meth and other drugs was definitely a problem that had to stop. It was a habit I had picked up at the many raves I used to go to when partying.

I had not fully admitted to myself that my drinking was something that had ruined my life just as much—if not more. 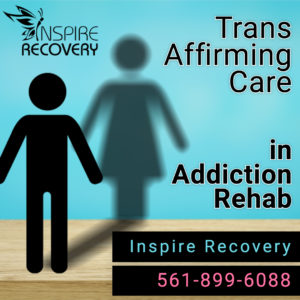 To get help getting clean, I went to Inspire Recovery for the treatment of my addiction.This rehab center is specifically for folks in the LGBTQ community. They treat substance abuse and mental health.

The therapy groups were all great, for the most part. Recovery isn’t easy, so naturally, some topics discussed were hard to listen to.

I listened to everything they had to say about how to stop using except for one reservation that I had held… quitting drinking. When the therapists and staff would talk about how drinking can ruin my life just as much as drugs, I quietly thought to myself, “yeah right.” Or “what the heck am I gonna do for fun then?”

Those reservations later lead me down a road to FULL ON ALCOHOLISM. Alcoholism that would take me to lows even lower than the meth ever did.

Let’s fast forward to a year after I entered rehab.

I left the halfway house I was living in. I met the “guy of my dreams” and married him. He was the rehab romance that ended up ruining my life. You can read more about that in another article I wrote called: Rehab Romance: It’s a Terrible Idea, Trust Me.

So, the guy I met in early recovery and I got our own apartment about two blocks away from the water. As beautiful and serene as it was, it didn’t take but a month before I was drinking and partying with “friends” again. “Friends” who I would later come to find out would not be around for long.

I picked up with my drinking right where I had left off. I was binge drinking and on the verge of losing the job that was paying for everything that I had that was allowing me to live this South Florida party girl lifestyle. Once the booze ran out and my wallet ran dry my friends were gone.

When the Bottom Falls Out

When I was active in Alcoholics Anonymous (AA) before, I had gotten back in touch with my higher power. I was a devote Buddhist and worked my program accordingly. But that’s far from where I was when the bottom fell out.

As more alcohol went down my throat—the more I lost touch with my higher power.

Before I knew it, I had lost my job and my husband was the only one working which made things very difficult for us.

I had never sold my body a day in my entire life.

However, deep in my alcoholism, I remembered how the girls in rehab used to talk about selling themselves as if it wasn’t a big deal. I used to go along with it and pretend I had done it as well. In reality, it was a line that I had never crossed.

A line that I used to tell myself I would never cross.

In a drunken stupor, I had this idea. Since I already lied and said I had done sex work, why shouldn’t I give it try? I figured I’d make a bunch of money so my husband and I could go back to having the careless worry-free lifestyle we had before.

The more I sold my body for money, the more I drank. This was an endless cycle. I consumed alcohol to cover up the mental and emotional anguish from my experiences. But I know now that alcohol was a coping mechanism, not a solution.

My life was a living hell and I wanted to die. On top of that, my husband who “loved me so much” was encouraging me to work because it was making us lots of money.

He became very abusive. I’m not going to go into detail, but if I ever write a book about my life, you bet the details will be in there.

I used to sit and cry, wondering how it had gotten to this point? How did I end up like this? I had become someone’s personal property. And it wasn’t because of meth… it was because of alcohol.

The Lowest Low I Experienced 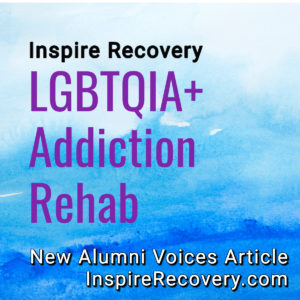 I tried to stop drinking but I would just throw up and have withdrawals. I begged my husband to allow me to be able to leave the house. He finally agreed and I started to go back to Alcoholics Anonymous (AA) meetings.At this point, I was battered and broken and had no idea what to do.

A month later, I tried to kill myself. I had completely lost my mind between the alcohol and the abuse. I was terribly depressed and didn’t want to live.

At this time, my husband finally figured out that things needed to change and get better. I was on bed rest healing for two months. During the first month in the hospital, the doctors were doing everything they could to keep me from dying of blood clots and infections.

Trying to Get Clean and Sober in a Transgender, Intersex Couple

Once I got out of the hospital, I started going to counseling and trauma therapy. I opened up to my therapist about everything that happened. It was extremely hard, but I’m thankful.

My husband and I were going to couples counseling. And I was going to Alcoholics Anonymous meetings.

I thought things were going back to normal at home with my husband. However, a few months later, the man I thought I knew came out as a trans woman. I thought since I am bisexual that I would be able to make things work, but the whole relationship complex had changed.

Without drinking alcohol, we didn’t really like each other.

We had become two completely different people. Me, a religious Buddhist trying to get her life back together. My partner was a young transgender woman in early transition, still drinking and smoking weed. She was refusing to actually deal with her problems.

I was trying to get the help I needed to move forward with my life.

My life was entirely in shambles. Even though, by now, I had a year sober.

But, remember when I first got out halfway, got an apartment with my partner? Those four months started a domino effect that destroyed everything I had worked so hard to build.

Alcohol destroyed my life and took me to much lower places, and I was shocked.

I tried to convince myself that I was a lesbian to make her happy, but I wasn’t. My sexual attraction is to men. After we got divorced, I decided to take a Greyhound bus back to South Carolina and move back home with my family.

On the bus ride, I remember crying myself to sleep. I wanted the nightmare to be over.

If you’re like me and are thinking that alcohol never makes anything better, I encourage you to reach out and get the help you need.

Getting clean and sober on your own is not really possible. If you’re gay, trans, lesbian, bisexual, pansexual, intersex or asexual and struggle with drugs or alcohol, call Inspire Recovery 561-899-6088 to learn about getting help.